We never will forget that Sunday

When Sam Maguire came home to Creeslough in 2012

While Sunday September 23 will be one date etched in the mind of every Donegal GAA supporter for years to come, the home coming celebrations for the six St Michael’s men who played a role in the famous 2012 All-Ireland victory is one that will go down as one of the town’s most significant days in local history.

It was almost surreal to think such small places as Creeslough and Dunfanaghy, a community joined in sport by St Micahel’s GAA club, could play a significant role in capturing the biggest sporting prize in the country.

Three days after the heroics of Jim McGuinness’s team in Croke Park, the homecoming of “The St Michael’s six” to Creeslough and Dunfanaghy brought an unrivalled sense of occasion, community and celebration, the like of which had rarely been seen in living history.

As the elation of that Sunday began to sink in – We were the Kings of the Country – all thoughts turned from Dublin to the North West and hosting a home coming fit for those newly crowned kings.

Following a hectic few days touring the county, just before 5pm on Wednesday September 26, the sound of the siren led Garda escort started drifting up Duntally hill announcing the victorious team were making their way to St Michaels territory.

Sitting proudly in the buses front window was the unmistakable sight of the Sam Maguire Cup. 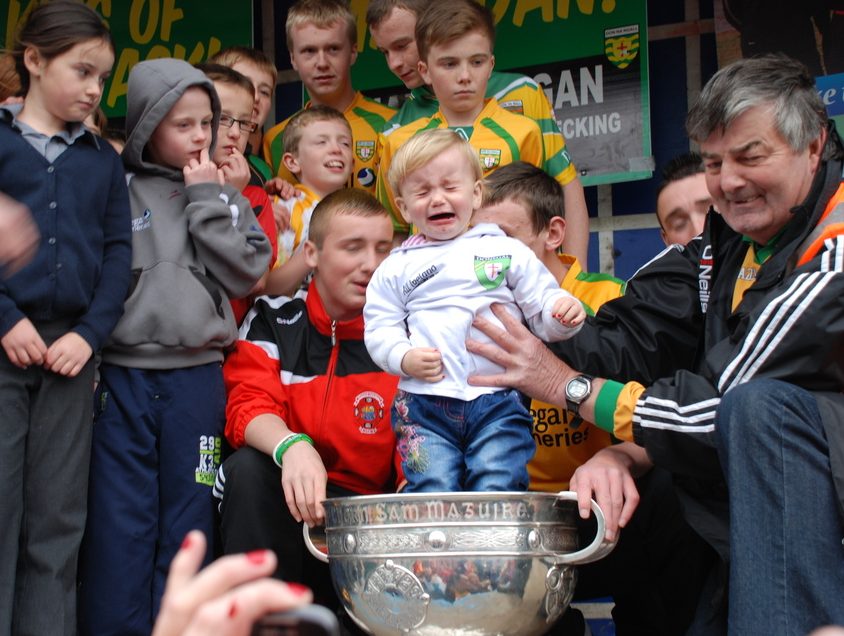 Our St Michael’s lads were back and the crowds turned out from every turn in the parish to join in the celebrations.

As the bus pulled up outside Rose and Noel Toye’s, there was a warm welcome home for their son Christy, the laidback stalwart of club and county.

The photos were taken for the album and he was joined by fellow Bridge men, Colm and Antoin McFadden, Martin McElhinney, Daniel McLaughlin and Peter Witherow, who then took ‘Sam’ for a spin down the town! 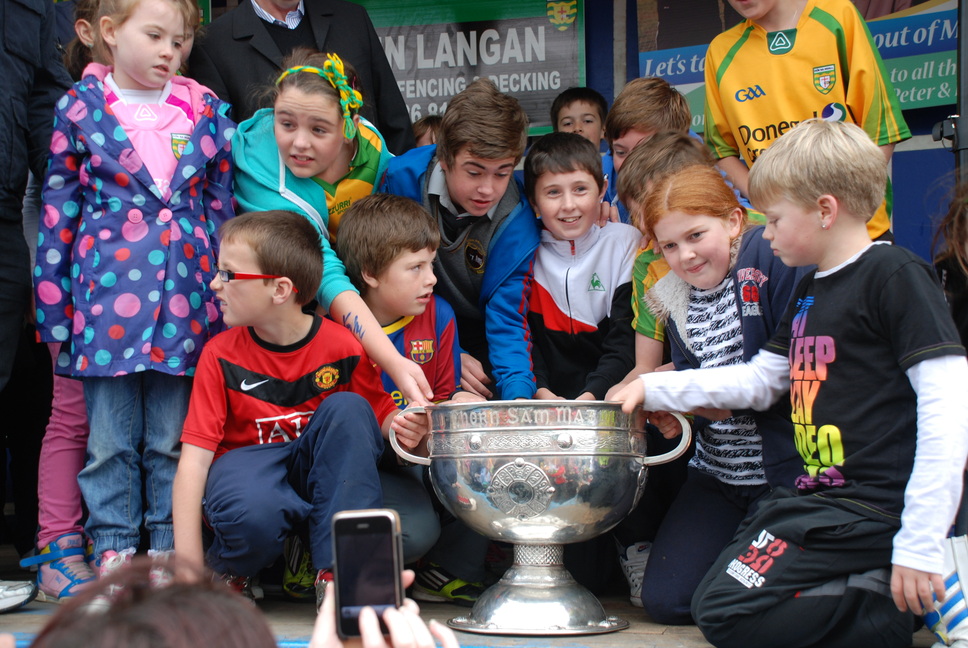 The crowd lined streets cheered the team as they strolled through the village and every vantage point was filled with a sea of green and gold. Sam looked suitably comfortable against the backdrop of the stone walled High Street. At the church car park, the lads, now joined by the rest of their Donegal colleagues who were each welcomed to Creeslough but the loudest cheer from the crowd was for the St. Michael’s men. 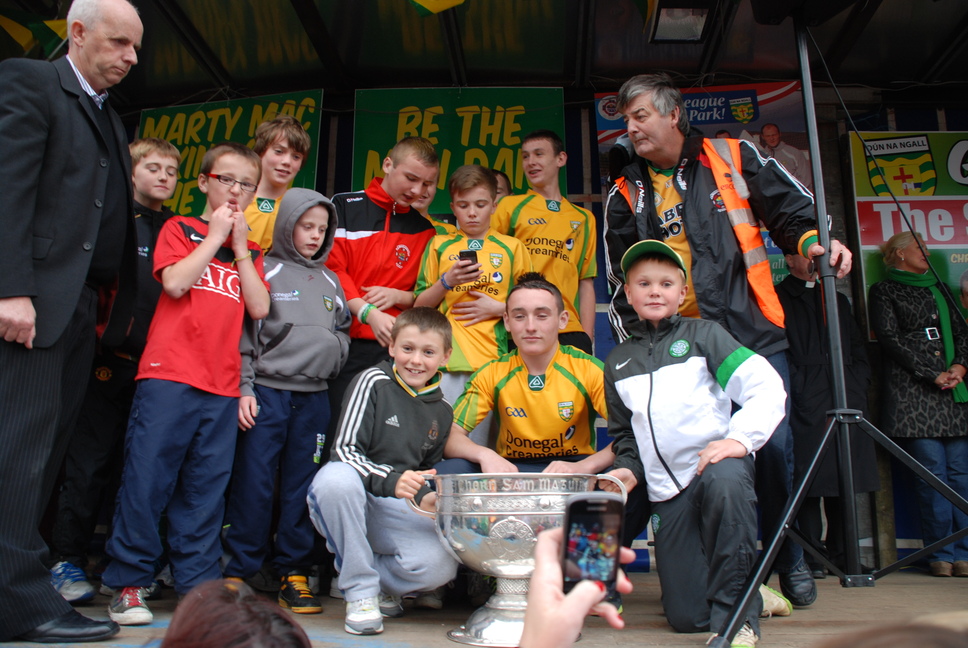 Club Chairman and proud father of a son who played an important role in the famous final, Liam McElhinney, was a master of ceremonies for the official home coming.

First up was someone the locality had started taking a small sense of ownership of in recent years, it was the man with the master plan, “our own” team boss, a delighted looking Jim McGuinness.

Having married local woman, Yvonne McFadden, who is the sister of players Colm and Antoin, Glenties man Jim, along with Yvonne and their family spent five years living just outside Creeslough in Terlin.

Addressing the large crowd he paid tribute to the supporters, the local club and to the players of St Michael’s who featured so prominently in his victorious squad.

“It’s a very special moment for the cup to come to any town in the county, but it’s particularly special when you have a member of the squad from that club. When you have six in an All-Ireland winning squad it is something very, very special,” he said to a huge cheer. 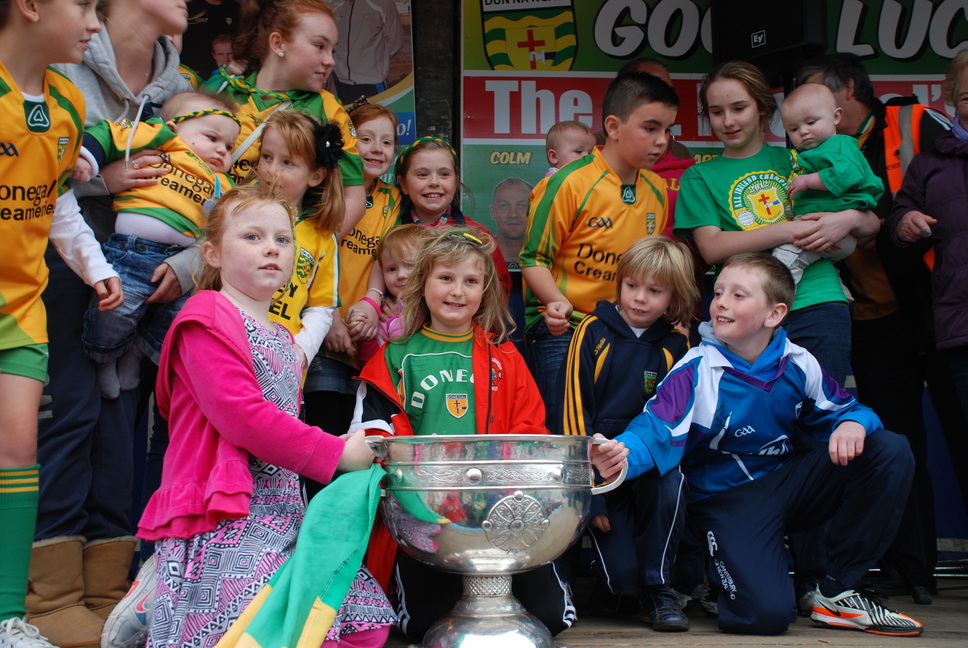 Paying tribute to the six boys, he praised them for their dedication to both club and county.

“Just to say a few words about the lads, you all know them yourselves from living with them in the community; they are all the very best of lads. They are very easy to work with. They train very hard. They have fantastic attitudes and that is why they are here today and that is why they are All-Ireland medal winners. We are all very proud of them. I am very proud of them myself because I spent a lot of time down here over the last five years, so I’m kind of a half Creeslough man at this stage,”

He paid tribute to the St Michael’s club for their commitment over the years and their underage structure that has produced many talented players over the years and a club that now has members on every strata of the various county teams. 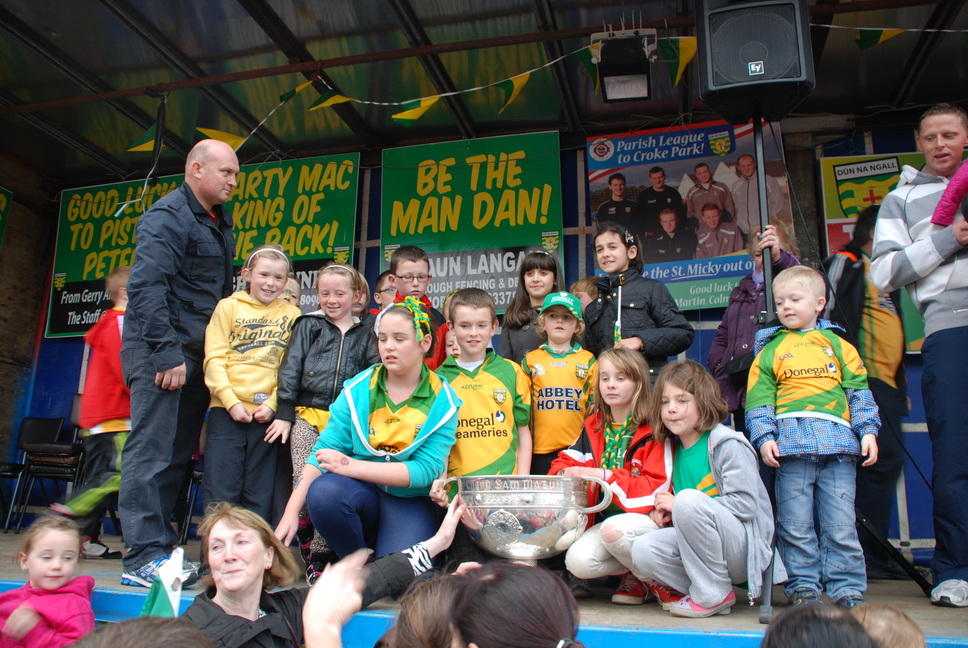 Next to say a few words was  Colm McFadden who Liam described as a “leader among men” in both the red and white as well as the green and gold.

Holding his little baby daughter, a relaxed Colm said looking out over the huge crowd who came to welcome them home was “unbelievable” and it was childhood memories that came flooding back when they touched down at home.

“Coming into Creeslough today was just unbelievable. It’s all the people you grew up with all your life. To think we are bringing Sam to Creeslough is just brilliant. We got off the bus at Christy’s home and we got a photograph with the cup and his parents, there were so many days we played football there out the back of that house.” 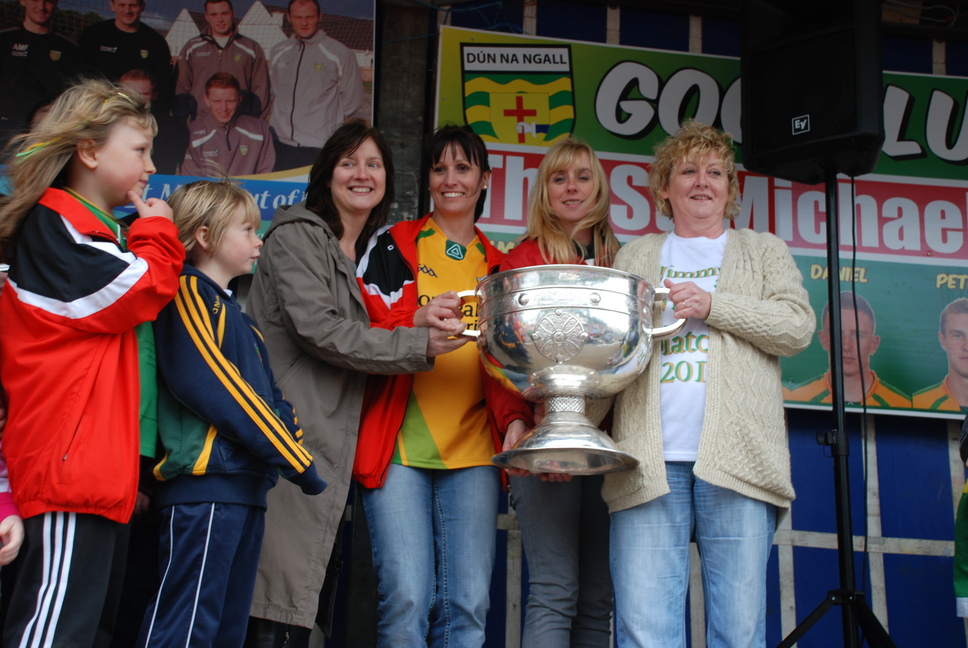 He recalls the inspiration from his school days in Naomh Mhuire NS that left him dreaming of footballing glory.

“I remember being at the school just down the road when Anthony Molloy and Tommy Ryan took the cup into us (in 1992) and to think we brought the cup back now is just incredible.”

Liam turned his attention to son Martin, a powerful player but not a man for the limelight off the pitch but he spoke up to thank everyone, including his parents and his club, for the wonderful support saying without them “we wouldn’t be here today”. 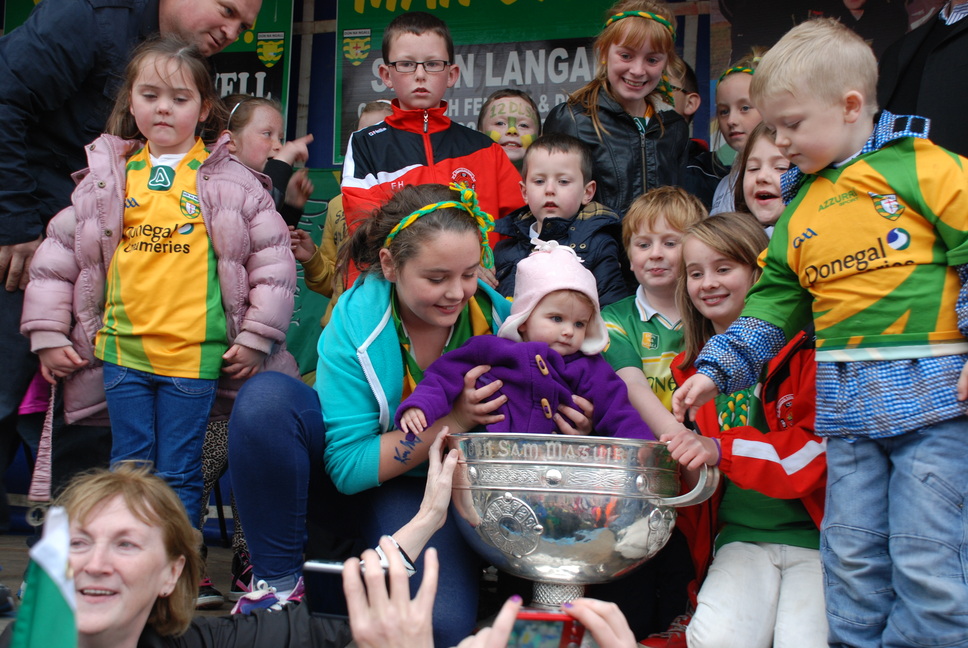 The last of the home town hero’s to address the crowd was Christy ‘Magnus’ Toye, when a special request came in from the manager that the long serving player, sing a song for the crowd.

Christy reiterated his teammates sentiments about how special the day was for him and the whole community.

“Before I blast everyone’s eardrums with a song I would like to thank everyone for coming out. It has been an unbelievable feeling and on behalf of the lads, we always wonder what it would be like to win and All-Ireland and what would the scenes what would the scenes be like when you came back to your home town with the cup?  Well, it’s absolutely unbelievable so thank you so much everyone for your support.” 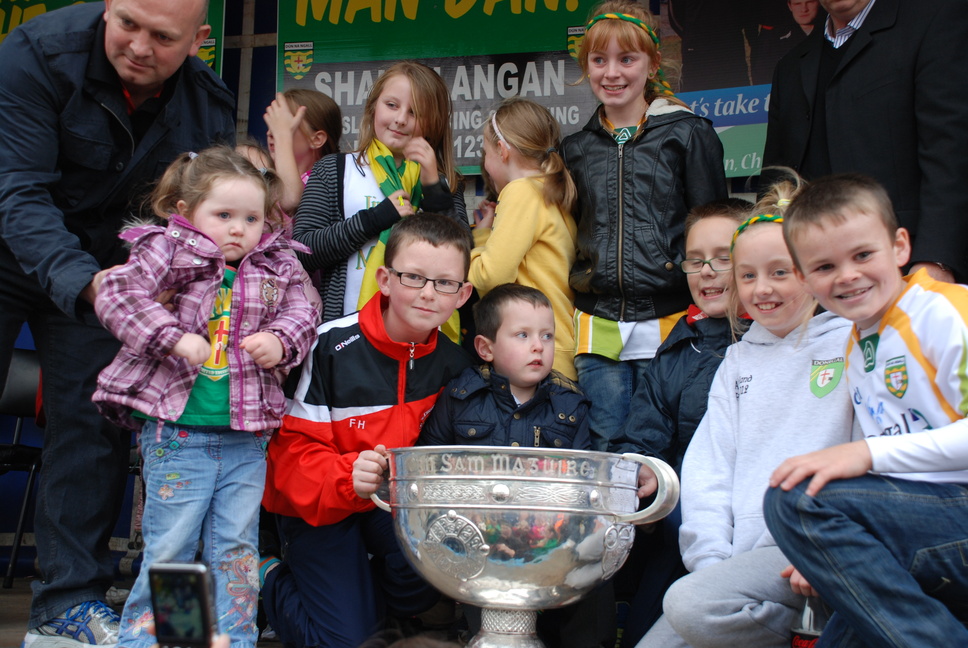 Keeping good on his promise to sing, Christy hit the perfect note when he burst into the first verse of the area’s most iconic song, the ballad called “The Emigrants Letter” penned by Percy French, better known to most as “Cutting the corn in Creeslough today” made world famous by local singing legend, the late Bridie Gallagher.

Another local singing star, Ben McFadden also from Ards, then treated the crowed to his specially penned anthem for the victorious team “ We never will forget that Sunday”.

As the team later boarded the bus to rapturous farewell applause, it was clear this day would go down in history and we never will forget that famous Wednesday either!

Memories from childhood holidays in Donegal

When California came to Creeslough

Memories from childhood holidays in Donegal

Creeslough View
"Donegal exports its men" 👷 What was it like for women in Donegal in 1964?

For over 13,000 videos, spanning 30 years, visit the Rewind portal ➡️ link in comments.

BBC Northern Ireland
"Donegal exports its men" 👷 What was it like for women in Donegal in 1964?

For over 13,000 videos, spanning 30 years, visit the Rewind portal ➡️ link in comments.
View on Facebook

Creeslough View
Worth a few minutes of your time.