Private Michael Dougherty is a famous American Civil war hero in his adopted home of America, but it was from humble beginnings in  Co Donegal that he began his life.

Michael Dougherty, the youngest of seven children, was born on May 10,1844 in Falcarragh, County Donegal and immigrated to America shortly before the outbreak of the Civil War. On August 8, 1862, he enlisted into the Union Army at Philadelphia, Pennsylvania, and was assigned to Company M of the 13th Pennsylvania Cavalry. Formed in Philadelphia and Pittsburgh, the 13th Pennsylvania Cavalry was a squadron of Irish dragoons attached to the “Irish Brigade” (2nd Brigade, 1st Division, 2ndArmy Corps) that saw continuous action in Virginia from February of 1863 until end of the war. However, Private Michael Dougherty participated in only seven battles; spending 23 months and 17 days of his service as a prisoner of war.

Although the book met with criticism with accusations of plagiarism and falsehoods during the mid-20thcentury, the book was an interesting read and several important facts remain undisputed. Private Michael Dougherty was first captured by Confederate soldiers on February 26, 1863 during the battle of Fisher’s Hill in Virginia when, as Michael later wrote, his horse was “shot out from under” him. Along with approximately 50 other prisoners, Private Dougherty was sent to Libby Prison in Richmond where he remained until a prisoner exchange was arranged on May 26, 1863, and he was returned to his regiment.

During the battle of Jefferson, Virginia on October 12, 1863, he again fell into the hands of the Rebels and spent four months in various prison camps anticipating another exchange. His hopes permanently were dashed when he arrived at the notorious Andersonville Camp (Georgia) on February 15, 1864.

Ironically, it was his actions on the same day as his second capture that resulted in the nomination of Private Michael Dougherty for receipt of the Medal of Honor. The citation read: “This soldier, at the head of a detachment of his company, dashed across an open field, exposed to a deadly fire from the enemy, and succeeded in dislodging them from an unoccupied house, which he and his comrades defended for several hours against repeated attacks, thus preventing the enemy from flanking the position of the Union forces.”

The official report also noted that Dougherty’s actions saved 2,500 lives. The medal was issued on January 23, 1897. Of the 127 soldiers in his regiment captured at Jefferson, Private Dougherty was the only one to survive the horrific conditions of Andersonville. 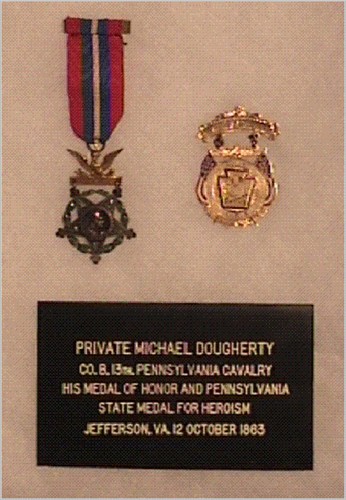 His diary records: Michael tried to occupy himself by visiting the different parts of the camp and recording any events in his diary. It is a stark record of the human misery he and others experienced during his time in the exposed 26 1/2 acre compound. Unsurprisingly, the main topics include new prisoners, the deaths of comrades, and rations:

“15th May 1864: We can see wagons haul away bodies from the dead-house, like so much dirt; as many as twenty bodies piled on one wagon. Upwards of fifteen hundred men have died since we came here.”

“20th July 1864: One hundred and thirty prisoners died yesterday; it is so hot we are almost roasted. There were 127 of my regiment captured the day I was, and of that number eighty-one have since died, and the rest are more dead than alive; exposure and long confinement is doing its work among us.”

Malnourished, ill, and suffering from painful rheumatism, he was placed in the camp hospital on August 28,1864, and remained bedridden until the end of the war. Finally, on April12, 1865, after 18 months as a prisoner of war, Private Michael Dougherty left Andersonville to begin his  long  journey home. However, his ordeal still was not finished.

Accompanied by around  2,000 other repatriated Union prisoners of war, Private Dougherty boarded the Sultana in Vicksburg, Mississippi, on April 23rd for transport to St. Louis, Missouri. The total number of persons onboard when the Sultana left Vicksburg was estimated to be 2,300; on a steamboat designed to carry a maximum of 376, including crew.

As weak and ill as most of the men were, they were going home and spirits were high. They did not mind the extremely cramped conditions and quickly found spots on the deck and railings. Songs and the laughter of those who had endured months of agony rang through the air.

The steamboat made its way upriver to Memphis. The currents were stronger than usual and the added weight stressed the four boilers to their limits. Approximately four miles north of Memphis, the Sultana rounded a bend in the Mississippi River and moved slowly past a cluster of islands known as the “Hen and Chickens.” It was 2:00 in the morning. Unable to contain the heavy build up of steam, one boiler exploded with a noise heard back inMemphis. Flames lit the night sky and the steamboat was ripped in half.

Remarkably, Private Dougherty found the strength to swim to one of the nearby islands where he was rescued the following morning. Of the thousands onboard, the survivors numbered only in the hundreds.

Private Michael Dougherty was discharged from the Army on June 27,1865 and returned to his mother and sisters at the family home in Bristol, Pennsylvania. He arrived weighing only 100 pounds, and was in such poor health, that it would be approximately one year before he was released from the doctor’s care and able to work. He was 21 years old and already had endured a lifetime of hardship.

A few years after his return, he married Rose Magee and their first child, Kate, was born in 1870. Rose gave birth to 12 children but only nine survived: Kate, Alexander, Edward, Charles, Mary, Margaret, Rose, Helen, and Elizabeth. The family remained in Bristol and Michael held various occupations over a span of more than 40 years.

From 2012 edition of the Creeslough View

From small town Creeslough to the glamour of Hollywood

Thank you and good night from one of Creeslough’s finest

Jane Austen and her Donegal nieces

Thank you and good night from one of Creeslough's finest

Looking back at one of Creeslough's greatest poets

Creeslough View
"Donegal exports its men" 👷 What was it like for women in Donegal in 1964?

For over 13,000 videos, spanning 30 years, visit the Rewind portal ➡️ link in comments.

BBC Northern Ireland
"Donegal exports its men" 👷 What was it like for women in Donegal in 1964?

For over 13,000 videos, spanning 30 years, visit the Rewind portal ➡️ link in comments.
View on Facebook

Creeslough View
Worth a few minutes of your time.