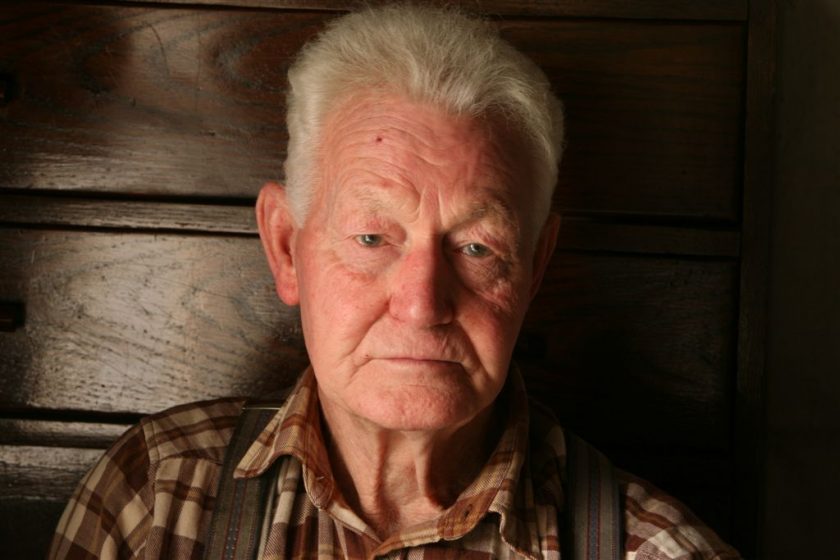 From 2011 Edition
By Marie Duffy

As you step inside John Baxter’s small cottage in Drimnacarry you are immediately taken by the neat spotless house he has. Like days gone by there are two huge sparkling kettles on the range whistling. Two buckets of turf sit beside the fire, and another two buckets filled with water sit beside the door. As people everywhere dread the introduction of water charges, John need not worry as he continues to draw his water from his well just like he has always done.

Stepping inside his house it is like stepping back to a more friendly, modest time. His home may be a humble one, but it is much richer than most homes who have a tv blaring in the corner and a family who don’t know how to speak to each other. John has no time for television which according to him shows ‘nothing but rubbish’ and instead is content to read books, magazines and newspapers during the long winter nights.

His home has a long history and it is where he was born all those years ago on August 10th 1933. A man amongst women John belonged to a family of five sisters. Lily, Mary, Sadie, Nora and Nancy.He attended Drimnaraw school until he was 14 and was taught by Master Boyle and Miss McClean. Although he remembers the time fondly he admits that ‘you’d often get the odd scutch if you weren’t paying attention or were misbehaving.’ He said:“It’s changed times now, and young people don’t realize how lucky they are to be in a nice warm school with shoes on their feet. We were in bare feet most of the year from around April to October and the only person who wore a pair of shoes every day was the teacher.”

After leaving school John worked for Neil Sheridan in Drimason where he remembers buying Neil’s Bicycle off him after he bought his first car. He then worked in Creenera for a couple of years before going to work on Wilkinson’s’ farm in Magheroarty. He worked there until 1957 when he went to Scotland to work on a Hydro-electric dam. He remembers the work being tough and with the hours long. “There weren’t many young people working on the dam at the time. It was tough work and many of the men were Islanders and fishermen from the highlands of Scotland, who were well used to a tough life. We worked in 12 hour shifts and worked five days a week.” After a year in Scotland, he returned home to Ireland, and to Wilkinson’s’ farm where he worked on the farm until 1975, where he worked during the week and returned home to Creeslough at weekends.

John recalls that people had more time for each other back then, and were always ready to help their neighbor. “You worked big hours on the farm but there was never any while rushing about like today.  These days everyone has somewhere to go, but back then we never went anywhere. Everyone had their own routine and stuck by it. There were set times for sowing the corn and the spuds, and everybody worked together to make sure it was all done in time.”

He fondly remembers neighbours helping each other out on the farm. ‘It was called swapping, and we would swap skills with each other as there was very little money and no-one could afford to pay a neighbor for their work. But they all helped out. But that day is long gone now, and you wouldn’t get many people willing to swap with you these days. But with things getting tougher, we might have to go back to them days.”

However, unlike today there was no heavy machinery to do the work. “I worked mainly with a donkey and cart. Very few people had horses but every house had a donkey. After that tractors came in and did the heavy work. Although things were tough, they were much simpler back then. We never had a lot but we had just enough to get by. We grew our own vegetables, had our own cow for the milk and butter. There was no such thing as running to Creeslough for milk.”

The train was the other method for transporting heavy goods and ran through Creeslough until 1949. “Before the train all the goods would be transported using Donkey and cart, or if you were lucky enough horse and cart. There was no other way. I remember the train well but never was on it because I never had anywhere to go. In my day there wasn’t many passengers and it was mostly a goods train carrying cattle and turf. They used to take turf from Gweedore to St Johnston, and then put them on the bigger train which travelled on to Dublin.”

Despite the focus in life being on hard work, there was one day that very little work got done and that was the day of the Creeslough Lammas Fair. “The Lammas fair was on every year on August 10th which was my birthday. It was a big do, and we would be waiting on it all year. Creeslough would be jam-packed with people, and all the cattle and horse dealers from around would be there. There would be stalls selling absolutely everything, but one thing I remember there bing lots of was Gooseberries. Creeslough used to be mainly a Gooseberry fair, and there would be stalls everywhere selling them. It was hard to beat the Lammas Fair. It was the highlight of the year.”

Although people were poor and money was scarce, John always remembers people making time for a night out. “Creeslough Hall was the place to be”, he remembers fondly. “It attracted people from all over. At the time I was doing some work for Mc Nulty’s and they had an old Lorry which I used to take to the dance. There would be maybe 20 in the back and I would head off to the halls around the place Glendowan, Trentagh and Glenswilly. The Lorry was fantastic, it would be used for work during the day and I would take it out to the dances by night.”

“It was 5 shillings into the Creeslough dance, and locals would be given back a half crown if no-one was about to see it.  They wanted to keep the locals coming, but if someone was about they would give the money back to you the next time they saw you. But they always charged the outsiders the 5 shillings. It was a great way of doing business as they knew they could always rely on the locals.”

Despite all the technology and advances in today’s modern world. As you sit in John Baxter’s beautiful little cottage in Drimnaraw, you would be forgiven for thinking the simple life without Sky Television, and computers was a much richer one for children growing up. It sometimes feels like the art of conversation and interaction is gone. But if it is a night of reminicising and good conversation that you want – make some time to call into to see John.